Summary:
We are filling up on magic at the dinner table as we look to the folklore and enchanted uses of ingredients like corn, apples, potatoes, and more!
Please check out our Patreon page! You can help support the show for as little as a dollar a month, and get some awesome rewards at the same time. Even if you can’t give, spread the word and let others know, and maybe we can make New World Witchery even better than it is now.
Producers for this show: Heather, WisdomQueen, Jennifer, Jen Rue of Rue & Hyssop, Little Wren, Khristopher, Tanner, Fergus from Queer as Folk Magic, Achija of Spellbound Bookbinding, Johnathan at the ModernSouthernPolytheist, Catherine, Payton, Carole, Stephanie, Kat, Breanna, Staci, Montine, Vic from the Distelfink Sippschaft of Urglaawe, Moma Sarah at ConjuredCardea, Jody, AthenaBeth, Bo, Scarlet Pirate, Tim, Bill, Leslie, Sherry, Jenna, Jess, Laura, Abbi, Nicole, AromaG’s Botanica, & Clever Kim’s Curios (if we missed you this episode, we’ll make sure you’re in the next one!). Big thanks to everyone supporting us! 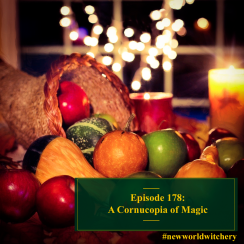 Play:
Download: Episode 178 – A Cornucopia of Magic
Play:
–Sources–
We pull a lot from folkloric sources in this episode, and you can find many of those through our previous posts on these ingredients:
We’d also recommend checking out our episode on Food Magic with author and cook Gwion Raven, as well as his book, The Magick of Food.
You can hear Cory talk more about turkey bones in folk magic (as well as other dinner table necromancy) at the recent episode of Cursed! Podcast: Cory & Corpses.
You can now also pre-order Cory’s forthcoming book, New World Witchery: A Trove of North American Folk Magic!
Image via Pixabay (CC 2.0/Public).
If you have feedback you’d like to share, email us or leave a comment. We’d love to hear from you!
Don’t forget to follow us at Twitter! And check out our Facebook page! For those who are interested, we also now have a page on Pinterest you might like, called “The Olde Broom.” You can follow us on Instagram or check out our new YouTube channel with back episodes of the podcast and new “Everyday Magic” videos, too (as well as most of our contest announcements)! Have something you want to say? Leave us a voice mail on our official NWW hotline: (442) 999-4824 (that’s 442-99-WITCH, if it helps).
Promos & Music
Title and closing music are “Woman Blues,” by Paul Avgerinos, and is licensed from Audio Socket.
Please consider supporting us by purchasing our promotional items in the New World Witchery Threadless shop or by joining our Patreon supporters.
If you like us AND you like Buffy the Vampire Slayer, you will love our new show: Myth Taken: A Buffy the Vampire Slayer Podcast, now available through all the podcatchers!
Please think about checking out our Audible Trial program. Visit Audibletrial.com/newworldwitchery to get your free trial of Audible, where you can download over 180,000 titles (including some narrated by Cory). Your purchases help support this show, and there’s no obligation to continue after the free trial