For today’s entry, I thought I’d approach two books which share a lot in common and which can be useful to people who really enjoy candle magic.  First up, there’s The Master Book of Candle Burning by Henri Gamache.   This is a classic in many hoodoo circles, and falls into the same category of early 20th-century magical texts as the reprints of Black & White Magic by Marie Laveau and Mysteries of the Long Lost 8th, 9th, and 10th Books of Moses, also by Gamache.  All of these small books (usually only around 100 pages each) contain lots of great information on their particular magical subjects, and all are the source of much debate regarding authorship (Marie Laveau most definitely did not write Black & White Magic, which is usually attributed to “N.D.P. Bivins,” whoever that might be).

Candle Burning, though, holds a special place in my heart.  In its pages, Gamache outlines the “Philosophy of Fire” which he traces through a number of the world’s religions, especially linking it to Judeo-Christian and Zoroastrian practice.  Most of what he describes is pseudo-history, though it offers some good food for thought, at times.  What makes this book so invaluable to a magic worker are its spells.  In its pages, it offers spells, prayers, and psalmic rituals for:

There are so many wonderful rituals in this book, covering a wide variety of problems, that I can’t help but recommend it.  The prayers (and psalms) are all centered around Judeo-Christian religious philosophy, but in a fairly non-denominational way (emphasizing God as a powerful force rather than as part of a Trinity or some particular theological concept).  One of my favorite spells is the last one in the book:

“But thou, O Lord, art a shield for me; my glory, and the lifter up of mine head.”

Affirmation [prayer]:  “Dear Lord I ask you to help me with my needs in this life and smooth my way.  Protect me so that no one may cause me harm.  In your light, darkness flees.  I fear not, knowing you are with me.”   (p.106)

The book has its issues, of course.  It makes heavy use of “black” versus “white” magic.  It denounces the black magic as a “perversion” but then proceeds to provide numerous candle rituals for things like breaking up a couple or causing confusion.  Still, if one can forgive it these foibles, it’s a great text to have on hand.

Similarly, The Magical Power of the Saints by Rev. Ray T. Malbrough proves itself a useful text full of practical candle burning rituals.  There are many who do not like Malbrough, primarily because he blends hoodoo and Wicca in some of his books without letting the reader know which is which (his Charms, Spells, & Formulas is guilty of this, and apparently his Hoodoo Mysteries is even worse about it).  However, most of the rootworkers who discuss him seem to offer at least some praise for Saints.

Malbrough focuses on the Catholic saints in candle form (and a number of condition candles, which are designed to invite specific conditions into a person’s life—e.g. Anima Sola/Lonely Soul, Just Judge, Lucky Bingo, etc.).  When I picked up the book I thought it would mostly be about the cult of certain saints like Dr. Jose Gregorio or Santa Muerte or the Infant Jesus of Prague.  Instead, I found it’s mostly candle magic focused on specific spells, much like Gamache’s text.  It definitely has a flavor of Catholicism about it, and actually falls pretty close to what I would think of as New Orleans-style Voodoo (though the connections to things like the Seven African Powers are only cursorily glossed).  For comparison, here’s Malbrough’s overcoming fear spell:

Sometimes fear can be difficult to shake off when it gets hold of you.  Then there are those people who get a thrill from putting fear and superstition in your mind.

As you can see, Malbrough is much more complicated than Gamache, and he definitely infuses his rootwork with some more Wiccan ideas (such as the “stones for courage” he mentions for the mojo hand, none of which show up in any of the African-American hoodoo sources I’ve found).  So long as you can separate the wheat from the chaff, though, this is a pretty solid little book with good candle burning rituals.  If you have this and Gamache’s Master Book of Candle Burning you will cover most of your bases as far as hoodoo candle magic goes, so I certainly recommend picking up both.  If you can only do one, I’d start with Gamache and try Malbrough once you’ve gotten the hang of a few of these rituals, though (perhaps an Obtaining Money burning so you can afford to buy the book?). 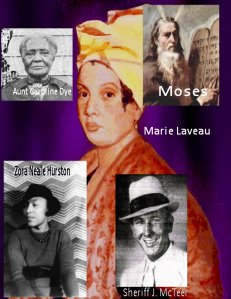 Today we’ll be looking at some famous personalities from the root working world.  These are not comprehensive biographies, by any means.  But they should at least give you some cursory information and enough information to look into the interesting lives of these conjure-folk further if you desire.

So, without further adieu, here’s Who’s Who in Hoodoo:

Marie Laveau – Known as the “Voodoo Queen of New Orleans,” there is much folklore and little fact surrounding the powerful figure of Marie Laveau.  She was a free woman of color living in New Orleans during most of the 19th century, living to be nearly 100 years old herself.  She was flamboyant—holding large dances in Congo Square and appearing frequently with a large snake which she had named Gran Zombi—but surprisingly also very devout, often attending Catholic mass on a regular basis.  While she is best known for her Voodoo associations, Laveau had a tremendous gift for magic, and was said to maintain control of the city through a network of informants and a healthy dose of sorcery.  Zora Neale Hurston, who studied hoodooo (and Voodoo) with Laveau’s alleged nephew, Luke Turner, wrote about Laveau’s  intense magical power:

“The police hear so much about Marie Leveau that they come to her house in St. Anne Street to put her in jail. First one come, she stretch out her left hand and he turn round and round and never stop until some one come lead him away. Then two come together…she put them to running and barking like dogs. Four come and she put them to beating each other with night sticks. The whole station force come. They knock at her door. She know who they are before she ever look. She did work at her altar and they all went to sleep on her steps” (Hurston, Mules and Men, Part II, Chapter 2)

Today, many people—magical practitioners or not—visit her grave in New Orleans, leaving her offerings and asking her for favors, a practice not uncommon in hoodoo. (additional info gathered from Wikipedia and R.E. Guiley’s Encyclopedia of Witches and Witchcraft).

Doc Buzzard – There are many who claim the name “Doc” Buzzard, but the most famous one is a South Carolina root doctor from the late 19th and early 20th centuries. He was a famed magician and healer, and was much sought after for his cures.  He was also white, which sometimes surprises people.  There were many inheritors to the name “Doc Buzzard,” one of the best known being a rather unscrupulous character who was eventually reigned in by…

Sheriff James McTeer – According to Jack Montgomery, who spent a good bit of time interviewing McTeer:

“Sheriff McTeer recounted a…conclusion to a psychic war he had with the famous Doctor Buzzard. McTeer ordered Dr. Buzzard to stop selling potions. This particular war of curse and counter-curses ended with the drowning death of Dr. Buzzard’s son. Soon after, Dr Buzzard visited McTeer and the two men made peace and became friends of a sort.” (Montgomery, American Shamans, Chapter 1)

McTeer was a gifted hoodoo in his own way, though he was less focused on the prefabricated potions which made hoodoo a viable commercial enterprise throughout the 20th century.

Aunt Caroline Dye – A famed hoodoo woman from Arkansas, Aunt Caroline Dye was another long-lived magical practitioner (supposedly living to the ripe old age of 108).  She was cited in Harry Hyatt’s encyclopedic text on hoodoo as being a great jinx-breaker, and the Lucky Mojo page on her cites several blues songs devoted to her legendary gifts.

Henri Gamache – A pseudonym for an otherwise unnamed author, Henri Gamache is the name associated with many of the most influential texts in mid-20th century hoodoo.  His “Philosophy of Fire” as outlined in The Master Book of Candle Burning is a foundational text for conjure candle rituals, and includes a good number of psalm rituals as well.  Other key texts authored by Gamache include Terrors of the Evil Eye Exposed and Mystery of the Long Lost 8th, 9th, and 10th Books of Moses.

Moses – Speaking of Moses…  There are many who look on Moses as the first conjure man.  He was imbued with holy power by G-d, and used several commonplace tools to create miracles, not unlike the conjure men and women of recent times.  Some of his “tricks” include:

Zora Neale Hurston was a major proponent of this view of Moses, making it a central theme in her book Moses, Man of the Mountain.  In Mules and Men, Hurston describes Moses as:

“The first man who ever learned God’s power-compelling words and it took him forty years to learn ten words.  So he made ten plagues and ten commandments.  But God gave him His rod for a present and showed him the back part of His glory.  Then too, Moses could walk out of the sight of man” (Hurston, Mules and Men, Part II, Chapter 1).

Of course, this is not the common view of Moses, but I like to at least consider the idea…but then I like to take a generally unorthodox view of lots of Judeo-Christian mythology, myself.

Zora Neale Hurston – To end, I thought I should at least mention the woman I’ve cited several times today.  Zora Neale Hurston is a folklorist from the mid-20th century whose most famous book is Their Eyes Were Watching God.  However much of her best work is in the study of hoodoo and Voodoo in books such as Mules and Men and Tell My Horse.  While many of her stories are elaborations or even (possibly) completely fictional constructs, they nonetheless provide a lot of good hoodoo techniques, recipes, and philosophies.  Taken with a hefty grain of salt, her work is a great way to explore hoodoo as it grew within the African-American community during the twentieth century.

That’s it for today.  Tomorrow I hope to get into contemporary rootworkers.  Until then…