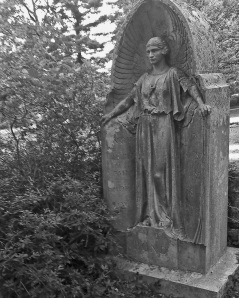 We’re almost at the end of this hiatus, and I haven’t posted anything really since right before I went off to grad school for the summer.  But that doesn’t mean I haven’t been up to some witchy business in the meantime.  Today I thought I’d share a few of the things I’ve been doing over the past six weeks (well, other than performing detailed exegeses of 18th-century English poetry and seeing about 27 different versions of Shakespearean performances).

The first thing I should tell you is that I was living on campus, and this campus just happens to be a beautiful rural campus right at the edge of Appalachia.  My access to folklore primary sources was much abetted, and my opportunities to get out in the woods increased a good bit.  Secondly, my dorm was immediately across from a beautiful old cemetery.  As you can probably guess, I spent a good bit of my time there.  Here are some photos of the amazing graves and other funerary décor found in the old boneyard.

The graves here date back to around the mid-nineteenth century, so they aren’t incredibly old, but many of them are gorgeous.  And they are certainly older than lots of other cemeteries in the area.

This also happens to be a religious school, so there are plenty of beautiful crosses here, too.  Since it’s as close to Appalachia as it is, the cemetery has a strong Celtic influence in the stonework.

The time I spent here mostly involved taking late night (or often midnight) walking tours of the area.  Among all those graves and under a very starry sky, it was pretty amazing.  If you’re wondering whether or not I encountered “anyone,” though, I have to say the answer is no.  I did bring offerings of food and whiskey several times, leaving them near the small side gate rather than any specific grave (since I wasn’t trying to contact anyone in particular, that made sense to me).  Wildlife abounds near this cemetery, so I often heard things wandering out in the dark just beyond the light’s cast.  I even occasionally met other folks taking late night constitutionals among the headstones.

Since I wanted to do well in my schoolwork, I also made up a potent little mojo bag, which I carried in my pocket.  I anointed it daily with either Crown of Success oil or some local whiskey, depending on what seemed appropriate for the day.  As far as I can tell, it worked magnificently (though I’m still waiting to get final grades back…mojo don’t fail me now!).  I may outline just how I made this specific mojo bag later this week in case there are other students looking for a little “oomf” in their studies.

Of course, a huge portion of my time was dedicated to reading completely non-magical texts (Paradise Lost, vast quantities of Shakespeare, a number of Restoration-era authors like Swift, Pope, and Dryden, etc.), but I also had time to work my way through a few magically inclined books as well.  I’ll be posting some reviews of those as time permits this coming week, so stay tuned for those.

The beautiful natural surroundings of the school also afforded ample opportunities to get outdoors.  Though the heat was stifling some days, trees always provided comforting shade and occasional mountain breezes helped cool me off, too.  So many of the plants that grow in that area have magical connections:  elder, sumac, sweet gum, passionflower, poke berries, and blackberries all grow wild.  I did some harvesting, particularly a good bunch of sassafras, so I’ll try to get some info up on that at some point, too.

Last, but certainly not least, I also had long drives to and from school on the weekends, so I filled up my iPod with lots of witchy podcasts and caught up on some of my favorites.  I also got to hear some new ones (at least new to me) that were excellent.  If you haven’t checked out Pagan Hooligans yet, it’s a great show and the hosts are a lot of fun.  They’re recording their adventures in paganism from day one, and it’s really a refreshing perspective!  I’ve also started really listening to and enjoying Iron Powaqa Radio, which has a decidedly sassy side and always makes me smile.

So that was my summer in a nutshell, I suppose.  I’m going to be trying to get back in the swing of regular posts as soon as possible, and hopefully there will be another podcast up fairly soon, too.  Until then, thank you all for your patience and support!  Feel free to post, email, discuss, and generally share your own New World Witchery here, and we’ll look forward to hearing from you!  Thanks for reading!

All the best, and be well,